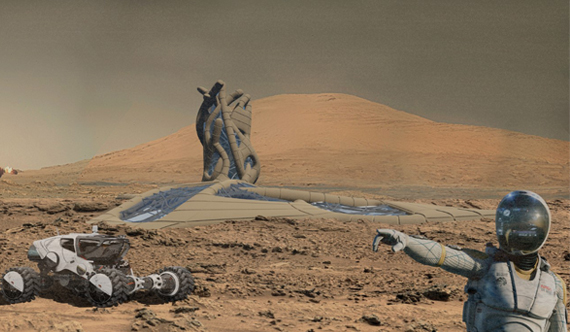 Indianapolis, IND. — Matt Jennings searched for a master’s thesis topic that could keep him entertained and engaged for a whole year. Little did he envision that his entry into an international competition to design a city on Mars would land him among the top designers and scientists in the world.

Or present the newly hired American Structurepoint architectural graduate a once-in-a-galaxy opportunity to meet NASA astronaut Buzz Aldrin, the second man to walk on the Moon, and “The Martian” author Andy Weir in the competition’s next phase.

Yet, his proposed Mars-based research colony is putting the newly hired American Structurepoint architect and the Mars City Design Competition on the intergalactic map. His research colony placed ninth overall in the competition and third place in the architectural category. His work recently appeared on the Fortune magazine website and in space journalist’s Leonard David’s blog. A crowdfunding campaign to raise $30,000 allowing the competition’s top 10 finalists to attend a two-week collaboration workshop in Los Angeles in September gives prominence to Matt’s designs.

“It seems like every week something more exciting happens,” Matt said. “This competition combines my two passions – architecture and space exploration – in ways that I could never even dream of months ago when this all started.”

Matt’s Mars research colony thesis began as a way to test sustainability on Mars. The competition’s criteria required all entries to grow to the size of an entire city with over 1,000 inhabitants, apply any technological breakthroughs for the benefit of Earth and be able to test the prototype through 3D printing.

“The most important factors in self-sufficient design on Mars is being able to create oxygen, produce food, filter water and provide structure,” Matt said. “The architectural design has to support each factor on a planet that does not do support human life, using Martian materials and computer-aided construction techniques.”

The Kickstarter campaign to send the top 10 finalists to the workshop caught the eye of a Fortune magazine writer who featured it, along with Matt’s graphics, as the top last-minute Father’s Day gift for geeky dads. The campaign’s incentive gifts uses another of Matt Jennings original design. A $35 donation to the campaign will land donors a T-shirt, a bikini-type swim suit top or boxer shorts adorned with one of Matt’s Mars graphics.

The Kickstarter campaign ends July 12. Ball State University has offered to pay for Matt’s airfare to the September workshop regardless of the campaign’s results. BSU is as proud as a planetary peacock that one of its architectural graduates has placed among design teams from MIT and Carnegie Mellon.

Matt, known as the Mars Guy among co-workers, is understandably pumped about it all. In particular, the chance to meet astronaut Aldrin.

“If I get to shake the hand of someone who has walked on the Moon, that will be one of the biggest highlights of my life,” Matt said.